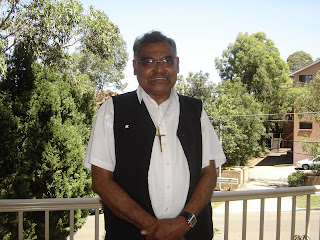 Recently a friend requested me to write about Br Terry Fernando, a lay Catholic missionary about how he lives the sacrament of anointing. Below is my short update.

Also check article on Br Keane, cfc who lived in love for glory of Christ

As for Br Terry's personal, spiritual and educational background, I will mention it in few lines below. Personally I believe he is divinely inspired simply because he tirelessly and generously preaches people to enter God's kingdom only via the sacraments. As I learnt, this simply and truly is what the Compendium of Catholic church teaches us.

1526 "Is any among you sick? Let him call for the presbyters of the Church, and let them pray over him, anointing him with oil in the name of the Lord; and the prayer of faith will save the sick man, and the Lord will raise him up; and if he has committed sins, he will be forgiven" (Jas 5:14-15). - The Catechism of Catholic Church

Regarding Br Terry, his educational background is that he studied Philosophy and Theology as a part of his seminary life for 8 years as he had joined the Seminary to become a priest. So I know he is aware, inside out of the references of this Sacrament of praying and anointing over the sick, within Bible, its liturgy, union of the Holy Spirit, and communal celebration in the Lord.

Basically in his journey of life for God or his spiritual background, Br Terry has been doing this service to the people of God for the past 40 years. I personally know him from past 3 years but good enough to vouch for a grand testimony.
As for the sacrament of Anointing of the sick (of healing), when it comes to real life experiences such as

then I must admit, there is no one close to him that I know of in person who lives the sacraments

Now ofcourse, Br Terry does this, in addition to the general moral support that he provides to a person at his weakest moment in life, i.e during grave illness or at a point of death - a special way through initiation of this sacrament.
If you are in need of any prayers, need to cure a sick, need a healing of body and spirit, then contact Br Terry Fernando

Also read my related article on Sacrament on Anointing