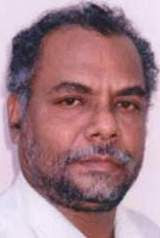 "For the wages of sin is death, but the gift of God is eternal life in Christ Jesus our Lord" (Romans 6:23)
Address: Paul Ciniraj Mohammed, Malankara Sabha Missionary, Devalokam, Kottayam-686038, India.

Date of Birth: 25 May, 1954.
He was born and brought up in a Muslim family named "Kochera" at Kalloor in Thiruvanandapuram, India.

His father, Janab Kassim Pillai, was a retired Headmaster of a Higher Secondary School and an Islamic Scholar. Mother was a housewife named Fatima Beevi. They belong to a priestly family of Muslim community, called "Labba family". Labba (Al-Abba) means Father, that is "Father of the Community".

Paul Ciniraj studied at Kalloor Government Upper Primary School upto 7th standard. Then Pothencode Lekshmi Vilasom High School till S.S.L.C. Took graduation from Mar Ivanios College and Post graduation from University in Trivandrum.
Amazing Testimony of Paul Ciniraj
My Background
As you might have already concluded from my name, I hail from a Muslim community. I came to the saving grace of the Lord and Saviour, Jesus Christ many years ago while I was still a university student. Some Christian boys there were distributing tracts which explained who the Lord Jesus Christ was. I, being a Muslim, was dead against their activities and used to threaten and torment them both physically and mentally. I was young, self-righteous and rigid in my views and was fully convinced that harassing and hurting them was the right thing to do.

A Piece of a Tract
One day I found a piece of tract in my notebook. It still remains a mystery how it has found its way into my book. I was about to throw it into a dustbin when my eyes caught the following words: "For the wages of sin is death, but the gift of God is eternal life in Christ Jesus our Lord" (Romans 6:23). These words made me feel uneasy. Still in spite of myself I read on, "Here is a trustworthy saying that deserves full acceptance : Christ Jesus came into the world to save sinners - of whom I am the worst" (1 Timothy 1:15). Until this moment I was convinced that I was not a bad man, and led my life in a proper way. But now, all of a sudden, I was full of doubts about my own attitudes, intentions and conduct.

The Vision
I went to bed, but was restless and could not sleep for a long time. When I finally fell asleep, I had a very strange and disturbing vision: One by one, all the transgressions and violations I had committed since my childhood began to appear before me, like the scenes in a movie. Then each one of them transformed into a blister on my body, till I was completely covered with festering sores. I felt unbearable pain. Realizing not what I was doing, I cried out "God! Hear me! Save me!"

Then, a person surrounded by bright light came down from heaven and touched me. I understood that He was Jesus, the one whom I had been waging a war against. His touch was pleasant, it cooled both my body and mind. I closed my eyes with a heavenly joy, and when I finally opened them again, I saw that all the blisters and sores disappeared from my body. But Jesus, who came in bright and spotless, was now infested with my sores. I immediately understood the meaning of this vision of mine, although it was only later, when I began to study the Bible, that I read this verse in the Bible: "Christ was without sin, but for our sake God made Him share in our sin in order that in union with Him we might share the righteousness of God" (2 Corinthians 5:21). I woke up a new man. At once I shared my experience to my father and my mother with a great joy. But my mother said, it was not from God, but trick of Iblis (Satan). But I was fully convinced that God the Heavenly Father made me as a new creation and His own child by the power of Salvation of His Only Begotten Son Jesus Christ  through the Holy Spirit.

This is my story how I, and later, my family too believed in the Lord Jesus Christ. I was called for His powerful ministry. He filled me with the Holy Spirit and gave me the gifts of preaching His Word, healing the sick, evangelizing the unreached and many others.

Facing the Wrath
But mine was by no means an easy path. Some of the community I formerly belonged to felt that my accepting Jesus Christ was an act of betrayal and they tried to take revenge. Once someone sprinkled sulfuric acid on my body. But by God's grace, they could not do any serious harm. The other time an assassin attacked me with a knife, intending to kill me. I survived the attack, though my lower jaw was badly damaged and I lost several teeth.

I made known that I had forgiven that person and hold nothing against him. Amazingly, later he had repented for his act and his own accord accepted Jesus Christ as his personal Saviour.
Children Not Spared
I have two sons and one daughter. A secret terrorist group had sent a man to destroy my entire family. He managed to make my children consume poison, and all of the three of them were in the hospital in a critical state. Christian community kept praying for their recovery. One by one, they began to get better. My daughter, though, remained in coma for nearly 30 days. Her recovery was just like someone being raised from the dead. the man, who gave poison to my children, was shaken to see the power of our Lord in action. He too became a follower of Jesus Christ and dedicated himself to working among the Muslim nations, particularly those involved in the acts of terror, and winning them over for the Lord.

Last year I and one of my assistant pastors were severely beaten in a village by a Hindu and Muslim mob and they burned down our prayer hall. God alone has saved me. Recently our Lord has enabled me to overcome a murder attempt. By making an accident somebody tried to kill me and I am undergoing the treatment. While I was in the hospital my wife and children also faced a murder attempt at home and God saved them miraculously.

Family Reunion
I must mention that my parents, my brothers and sisters were all devout Muslims. Most of the seniors are Hajis (man who did pilgrimage to Mecca is called Haji) and Hajjummas (woman who did pilgrimage to Mecca is called Hajjumma). Having let Jesus Christ into my life, I was ex-communicated and for quite some time was not allowed to have any contacts with my parents and the extended family. I and my wife felt sad about it and brought this matter to the Lord in prayers. Gradually, I began to re-establish links with my people through letters and telephone calls. Finally, a day came when they had accepted the fact that I worship Jesus Christ, visited my place and stayed with us and their grandchildren. I spoke to them about the love of God. They left, and we had maintained good contacts since then.

Later I was told that just two days before his death, my father accepted Jesus Christ as his Lord and Saviour because he had had a vision of Jesus with the marks left by the nails and His hands and feet. My mother too became a believer shortly before her death.

Rev. Paul Ciniraj & family along with his father and mother 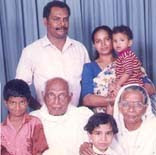 Spreading the Message of His Love
Presently, I work for Him who took away my sin. My family is assisting me in my mission. Our ministry is called "Salem Voice Ministries". Jesus Christ is the King of Salem (king of peace) and priest of God Most High (Hebrews 7:1). We proclaim His voice (Gospel). That is Salem Voice Ministries. "Injil Ministries Alliance Mission" is a special wing of the Salem Voice Ministries to reach the Gospel to the Muslims. I am also helping the Bible Society of India to prepare 'Holy Gospel' in Malayalam for the special audience.

Like all Indians, we love India as our mother and we are keen to win India, as well as the third world, for Jesus by spreading the message of the gospel through charitable and social activities. We distribute tracts and Bibles, provide missionary training to volunteers, send out missionaries, run orphanages, help to educate both children and adults. We are planning to launch some mobile dispensaries shortly to reach remote rural areas. We do not intend to "convert" people to make them leave their community. We only want to open their hearts to the love of Jesus Christ and show what the Almighty can do if we allow His saving grace to direct our lives.
Paul Ciniraj is a well known convention speaker in entire Orthodox Church and Indian Ecumenical Movement. He spreads the messages of Love and Peace through conventions and retreats. He is the "Missionary of Peace".

He has written and published many books in Malayalam. Some of the books are:--
1. Maranavum Roopantharavum (The Death and Transfiguration),
2. Itha Ninte Amma (Behold Thy Mother),
3. Swargeeya Ayiru (The Heavenly Ore),
4. Bible Tablet and Quiz,
5. Vishudha Qur'an Quiz (Quiz from the Glorious Qur'an). He published many articles in periodicals too.