Saint Padre Pio vs The Devil 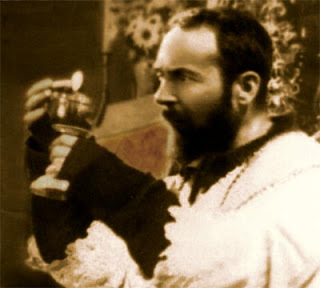 One of the first contacts that Padre Pio had with the prince of evil occurred in 1906.  One night, Padre had returned to the convent of Saint Elia of Pianisi.  He couldn't fall asleep that night because of the enormous summer heat. He heard the footsteps of someone coming from a nearby room. Padre Pio thought, "Apparently, Friar Anastasio couldn’t sleep either."  He wanted to call out to him so that they could visit and speak for awhile. He went to the window and tried calling to his companion, but he was unable to speak. On the ledge of a nearby window, he saw a monstrous dog. Padre Pio, with terror in his voice, said, “I saw the big dog enter through the window and there was smoke coming from his mouth.  I fell on the bed and I heard a voice from the dog that said, "him it is, it is him". While I was still on the bed, the animal jumped to the ledge of the window, then to the roof and disappeared." 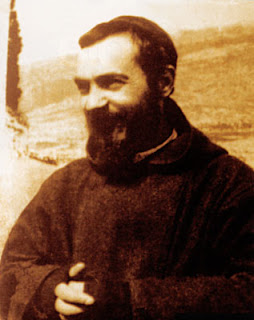 The Devil attacked Padre Pio with numerous types of temptations. Padre Augustine also confirmed that the Devil appeared to him under many different forms.  "The Devil appeared as young girls that danced naked, as a crucifix, as a young friend of the monks, as the Spiritual Father or as the Provincial Father; as Pope Pius X, a Guardian Angel, as St. Francis and as Our Lady.”  The Devil has also appeared in his horrible forms with an army of infernal spirits. There were other times when Padre Pio was approached by the Devil but without any apparition. He was troubled with deafening noises and covered with spittle, etc. Padre Pio succeeded in freeing himself from these attacks of the Devil by invoking the name of Jesus.

The struggle between Padre Pio and Satan became more difficult when Padre Pio freed the souls possessed by the Devil.  Father Tarcisio of Cervinara said, "More than once, before leaving the body of a possessed, the Devil has shouted, "Padre Pio, you give us more trouble than St. Michael"; also, "Father Pio don't steal the bodies from us and we won't bother you." 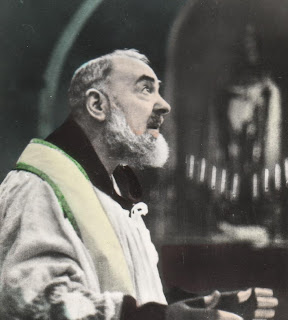 In one of the letters to Padre Agostino, dated January 18, 1912, he stated, “The Devil does not want to lose this battle. He takes on many forms. For several days now, he has appeared with his brothers who are armed with batons and pieces of iron.  One of the difficulties is that they appear in many disguises. There were several times when they threw me out of my bed and dragged me out of my bedroom.  I am patient, however, and I know Jesus, Our Lady, my Guardian Angel, St. Joseph and St. Francis are always with me.”


Satan's Deception - 'Father of all lies' 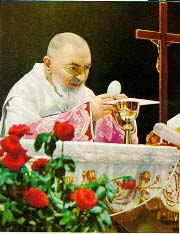 Satan went beyond all the limits of deception when he went to Father Pio pretending to be a penitent. This is the Father Pio’s testimony:  “One day, while I was hearing confessions, a man came to the confessional where I was. He was tall, handsome, dressed with some refinement and he was kind and polite. He started to confess his sins, which were of every kind: against God, against man and against the morals. All the sins were obnoxious! I was disoriented, in fact for all the sins that he told me, but I responded to him with God’s Word, the example of the Church, and the morals of the Saints.   But the enigmatic penitent answered me word for word, justifying his sins, always with extreme ability and politeness.  He excused all the sinful actions, making them sound quite normal and natural, even comprehensible on the human level.. He continued this way with the sins that were gruesome against God, Our Lady, the Saints, always using disrespectful round-about argumentation. He kept this up even with with the foulest of sins that could be conjured in the mind of a most sinful man.  The answers that he gave me with such skilled subtlety and malice surprised me. I wondered: who is he? What world does he come from? And I tried to look at him in order to read something on his face. At the same time I concentrated on every word he spoke, trying to discover any clue to his identity.. But suddenly; through a vivid, radiant and internal light I clearly recognized who he was. With a sound and imperial tone I told him: “Say long live Jesus, long live Mary!” As soon as I pronounced these sweet and powerful names, Satan instantly disappeared in a trickle of fire, leaving behind him an unbearable stench.”  (Don Pierino is a priest and one of the father Pio’s spiritual sons who were present at the same time.) 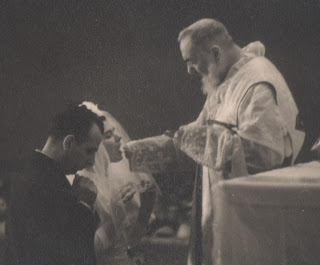 “One day, Padre Pio was in the confessional, hidden by two curtains. The curtains of the confessional were not closed all the way and I succeeded in seeing padre Pio. The men, following the bookings, were prepared on a side, all in single row. From the place where I was, I read the Breviary and, sometimes I  looked up to see the Padre. From the little church, through the door, a man came. He was handsome, with small and black eyes, grizzled hair, with a dark jacket and ruled trousers. I didn’t want him to distract me and  so I kept on reciting the breviary, but an internal voice told me: “Stop and look!“ I stopped and looked at padre Pio. That man, while taking footstep back and forth and without waiting his turn, stopped just in front of the confessional, after the previous penitent went away. He immediately entered among the curtains, standing, up in front of padre Pio. Then I didn’t see the dark haired man after that moment. Following some minutes I saw that man sank on the floor with his legs widened. On the chair in the confessional, where Padre Pio had been sitting, I didn’t see padre Pio anymore; but, Jesus. He was blond, young and handsome and he gazed upon the man that had fell to the floor. Then again I saw padre Pio coming up from there. He returned to take a seat to in his place and his appearance melted with Jesus’ appearance. Then I saw only Padre Pio. I immediately heard his voice: “Hurry  up, everyone.”   Nobody noticed this happening!  Everybody started with their turn again. 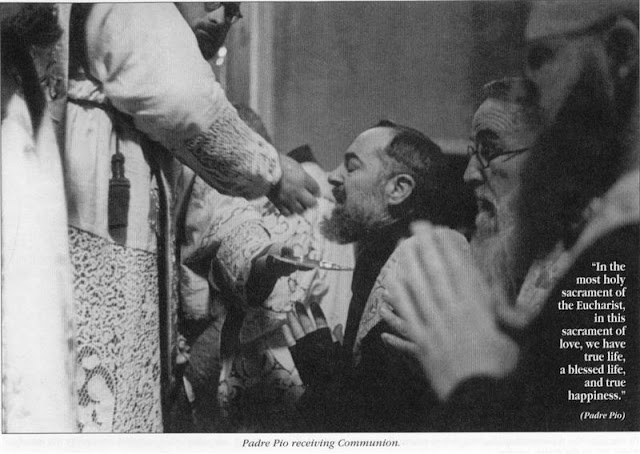 From the Catechism of the Catholic Church

1034 Jesus often speaks of "Gehenna" of "the unquenchable fire" reserved for those who to the end of their lives refuse to believe and be converted, where both soul and body can be lost.

Email ThisBlogThis!Share to TwitterShare to FacebookShare to Pinterest
Labels: Saints vs Satan, VISION OF HELL

Please help us pray for the repose of the soul of Bernardo Marasigan. I know that he had a good fight after being visited by patients like me. Relatives had told that he had a stomach and chest problems - my problems I have - and up until now, is still bogging me. But with his help, paranormal disorders were reduced to rhinitis, one of the deadliest disorders I have right now. I am talking about the forces of evil in Metro Manila and Quezon City and Batangas province where I've stayed. I have this feeling that Mr. Bernardo got my enemies' powerful spells and died afterwards. I felt guilty afterwards. He'd been a veteran faith healer and probably a good spiritual warrior but I think, good people never die, they just transfer. He cured me once and I hope that God will reward him for all his good works here on earth. Please include us in your prayers. I will be killed by evil forces here in the Philippines but I think that the power of God and my faith in Him and good works everyday may be enough to attain eternal life and happiness. Thank you for your prayers! I hope that copying Catholic prayers for others' sakes will not violate any of your laws. I've sent them days ago to others who may be in need of powerful prayers like yours. Thank you again! Eternal rest grant unto him, O Lord, and let the perpetual light shine upon him. May he rest in peace. Amen.

This and many of your other articles inspired me to have more faith in God, in Jesus and in Mother Mary.

Thank you and I hope more people will enjoy and believe in these articles.

Padre pio please pray for our family, we are facing alot of difficulties in life after the lost of our beloved uncle Joseph mariadass, please forgive all the sins and evil work that his wife do for him and us, we dont want to lost anyone is the family, we want Jesus, our peace giver , our pride and our salvation. please lead us to Jesus and cast away all evils around us, bless all of us, we need you fr padre to fight against my evil in my family, save us save our soul from satanic works. amen.

that the Holy Spirit may guide and give my niece strength to leave her current abusive relationship and someday, God willing, find a nice Catholic young man to marry and help her raise her son

Saint padre pio plse pray and intervened my behalf that I will experience Gods mercies and compassion His victory and peace amidst. all these chaos ,confusion ,betrayals and injustice around me.My saviour Jesus Christ to be my warrant against all accusations or Indictment. .To enforce triumphant victory of my Lord Jesus Christ in my situations. Dearest Saint I have heard a lot about you . Let me feel Yule aid and the gratitude of my heart will always remain yours in our Masters Name. November 18th at 18..30

Padre Pio please pray for our family, friends, pets, and everything connected with us. We are under attack by witches and other evil spirits and perhaps even the devil himself. Please ask Jesus and all the heavenly Host to protect us and destroy our enemies that they may bother us or be in our lives no more at all. Sweet Saint, you who battled Satan himself and know the tricks and deceptions he and his demons are capable of ask Jesus and the Paraclete to grant us discernment and unwavering faith, hope of Heaven, and invulnerability to all evil influences. In the NAME of JESUS and the HOLY TRINITY, I AM, and the HOLY SPIRIT and all the Saints and ANGELS of HEAVEN I ask this. AMEN

Saint Padre Pio please help me to overcome the temptations of the devil.

Saint.Padre Pio protect my family from the plus and temptations of the devil