Sister Rani Maria, martyr of the faith: the conversion of her assassin

Sister Rani’s murderer now says, “Christians are India’s hope”
Samandar Singh killed a nun in 1995. After that, he converted to Christianity and today he is a different man. He helps Tribals and for him Sister Rani’s family has become his own. Sadly, he agrees that a climate of anti-Christian hatred is currently sweeping across India. He urges his compatriots to see the truth in the presence of missionaries in the country.
Madhya Pradesh, Udaya Nagar:
“I accept full responsibility for my heinous murder of Sr Rani Maria. I cannot say that I was instigated, because my own hands stabbed her repeatedly and for this I will regret my actions till the day I die,”
Samandar Singh told AsiaNews. He is the man who on 25 February 1995 stabbed to death Sister Rani Maria. The diocese of Indore, where she worked, has ended the diocesan leg of the inquiry into her death. Now the Vatican will have to decide whether she died a martyr of the faith or not. Whatever the outcome of that will be, Sister Rani Maria has already accomplished a miracle. Her assassin has repented and has become a member of her family.
Tomb of Sr Rani Maria 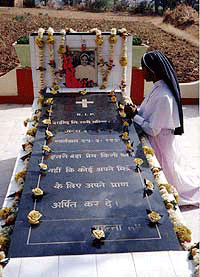 “In my own small way,” he said, “I try to follow her example, helping those who are less fortunate than me, like Tribal Christians and all those who are marginalised.”
After his arrest in connection with the nun’s murder, he was tried and sentenced to prison, where he spent 11 years. During that time, his wife divorced him and his first son died.
Behind prison walls, he began plotting how he could take revenge against the man who pushed him to kill the nun. But he also received a visit from another nun, Sister Selmi Paul, who happened to be the murdered nun’s own sister. She hugged him and called him brother. He was profoundly touched by it, so much so that from this embrace his journey of repentance began. He gave up plans for revenge and accepted the sorrow caused by the murder. Eventually, Samandar was released because of a petition signed by Sister Rani’s family, the provincial of the Clarist congregation and the bishop of Indore. When his release was slow in coming, a delegation went to see the local governor to plead his case.
“Only you Christians can truly forgive,” the latter said. “You are a great example. Go, I shall do all I can to get him released.”
Once he was free again, Samandar began to treat Sister Rani’s family as his own.
“I regularly visit her tomb,” he said. “For me, it is like a sanctuary of peace and strength.” “I want everyone to know that Christians work to make India great. The missionaries give us hope through their service, which is to make us a strong and independent people.” 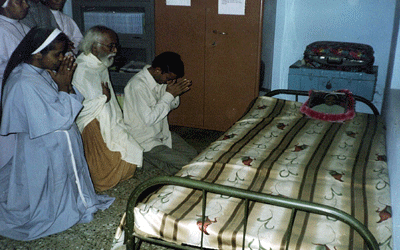 He does realise though that India’s rightwing hate Christians.
“Before they drove me to kill, I heard so many hate-filled lies about the missionaries and Christians. They used to tell me that Christians converted people through tricks and that their work with the poor was only for show. Now however I can say without a doubt that the missionaries do nothing but work and help the poor and the marginalised. They have not secret design, other than serve God.”
Sister Rani Maria, martyr of the faith: the conversion of her assassin
Fifteen years after the martyrdom of the religious, murdered for her commitment to the poor and for her Christian faith, the priest who oversaw the diocesan investigation tells AsiaNews life about her life and her work. The conversion of her murderer, a Hindu farmer, due to her intercession. Udaya Nagar (AsiaNews) - Sister Rani Maria, who, fifteen years ago became a martyr for the faith that led her to always help the poorest of the poor, "encourages us to move forward. Her example of life and death are a stimulus for us who are still her today, we have a powerful intercessor before the Lord".
Monument where Sr Rani Maria was assasinated 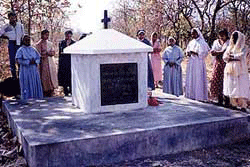 This is what Fr Cherian, spokesman for the Diocese of Indore and director of the local society for social services who accompanied the religious in her humanitarian work and who oversaw the collection of documents for her beatification, tells AsiaNews. The diocesan inquiry on the life and works of the religious was completed two years ago. The results are now been studied by the Vatican. The priest today presents his testimony on the life of the religious. Sister Rani Maria While working for the people and for the Lord-she sacrificed her life.  Like Jesus, she died on the Cross -while she was faithfully and selflessly carrying her work among the people among the people. Sr Rani Maria’s  life and her death has become an inspiration and hope for us- to continue to do good, to work and serve the people even at the cost of ones life- to be another Christ and this has brought graces for us.
The priests of Indore Diocese have a powerful intercessor and this year is a grace filled year as it is the Year for priests.  While I was deeply pained by her murder, we are sure Sr Rani Maria is alive in heaven, interceding for us to continue working to establish the Kingdom of justice, peace and truth. Throughout her life, Sister Rani Maria worked tirelessly to help the villagers - mostly poor tribal - to establish self-help groups by obtaining financial credit and other forms of economic support. She made sure that they were granted to the villages in order to improve the welfare and earning potential. She worked tirelessly to help this often oppressed sector of society.
At the same time, she always ensured that these movements were popular in nature, without external influences: she preferred to act as a catalyst of humble people. In this she strengthened the panchayats (village councils) urging them to consider and be aware of their rights and their responsibilities, providing assistance through planned and systematic development programs. In December 1994, in the run up to the village council elections, a fight broke out between Catholic tribal families( Barela sub-caste) and a right wing candidate. Police arrested some of the Catholics and Sr. Rani hired a lawyer and had them released.  This created a lot of hostility and a false impression that Sr Rani Maria was instigating people against them.
Left to themselves, the tribal would not be so emboldened as to stand up to any pressure from a powerful political force or even engage the services of a lawyer to fight their legal battle. On February 25, 1995, a farmer was who was hired to kill Sr Rani Maria, entered the bus in which Sr Rani Maria was traveling, and stabbed Sr. Rani her repeatedly. The bus stopped, and the people left out of fear. Then, he dragged Sr. Rani outside the bus and continued stabbing her until she died. After serving a ten year prison term this man was released and now this man is undergoing a complete transformation of heart, he expresses deep sorrow and remorse for his deeds and proclaims on public platforms Christ and His forgiveness, and he owes his conversion of heart to Sr Rani Maria. 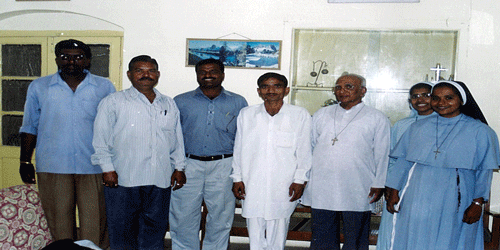 Sr Rani Maria continues to help us, and especially in moments of crises, her life and also her death are an encouragement to us to persevere. I know, left to ourselves, we are not strong, but we are given Strength and heavenly blessings by the Lord, by her constant intercession.