Highly educated and well-placed upper-caste Hindus and Muslims have also risked censure from their immediate family and community to take the crucial plunge.

They all have their own reasons for giving up one religion for another.
As Jesuit sociologist Rudolf C. Heredia puts it in his book,
Changing Gods, Rethinking Conversion in India:
"Conversion is a question of personal choice, it involves a rejection, a change or an adaptation of one's identity. A complex set of motivations are involved. The change is the result of a personal quest, which may be more than a religious or spiritual one. Positively, this is experienced as a liberation; negatively, it could be an escape."
So what is it like to switch from one god to another? 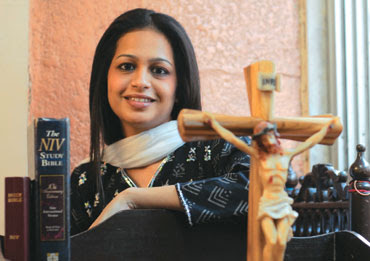 "My mother was a Catholic who converted to Islam when she married my father. We performed namaaz regularly. But my faith was shattered when I came across a verse in the Quran that prescribed corporal punishment for stubborn women. I was shocked. I asked my father, who told me that it was like chiding a child for not listening to elders.

"After my parents separated, I moved in with my mother, who had become extremely short-tempered and abusive. At the same time, she started attending church. I used to attend the congregations she went to, at which people danced and sang, something unheard of in Islam. It was then that I started reading the Bible. I found Christianity a far more liberating religion. My life became stable, and I started doing well in my studies. I have been praying every day ever since."

That's an amazing experience! I am truely glad that you heard the call of our God, Jesus Christ! may he strengthen you and your family and keep you all safe! amen. ;)

God Bless you, I too am trying to convert to Christianity, not from Islam, but as a non-believer. Great story and I know how hard it is for Muslims to convert, may God keep you and your family safe <3

greetings from a christian in india.......