APPARITION OF A SOUL FROM PURGATORY - Padre Pio

Padre Pio started to have apparitions when he was a child. 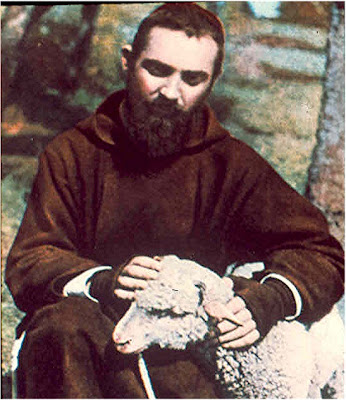 One evening Padre Pio was in a room, on the ground floor of the convent, turned guesthouse. He was alone and had just laid down on the cot when, suddenly, a man appeared to him wound in a black mantle. Padre Pio was amazed and arose to ask the man who he was and what he wanted. The stranger answered that he was a soul in Purgatory.

“I am Pietro Di Mauro” he said “I died in a fire, on September 18, 1908, in this convent. In fact this convent, after the expropriation of the ecclesiastical goods, had been turned into a hospice for elderly. I died in the flames, while I was sleeping on my straw mattress, right  in this room. I have come from Purgatory: God has granted me to come here and ask you to say Mass for me tomorrow morning. Thanks to one Mass I will be able to enter into Paradise”.

Father Pio told the man that he would say Mass for him..., “but…“padre Pio said: “I, wanted to accompany him to the door of the convent.  I surely realised I had talked to a dead person, in fact when we went out in the church square, the man that was at my side, suddenly disappeared”.

I have to admit that I re-entered in the convent rather frightened. Padre Paolino of Casacalenda, Superior of the convent, noticed my nervousness, after explaining to him what happened, I asked “permission to celebrate Holy Mass for the deceased soul,”

A few days later, Father Paolino, wanting to verify the information, went to the office of the registry of the commune of St. Giovanni Rotondo.  He required and got the permission to consult the register of the deceased in the year 1908. The story of Father Pio Father was true.

In the register of deaths of the month of September, Father Paolino found the name, last name and cause of death: “On September 18, 1908 in the fire of the hospice, Pietro Di Mauro died.” 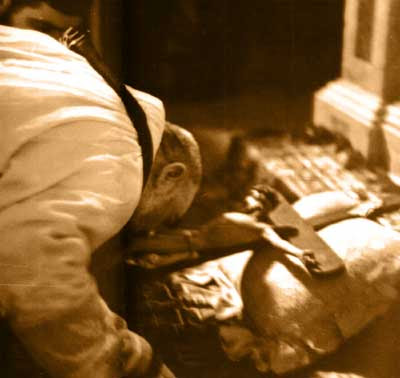 “One evening, while I was alone in choir to pray, I heard the rustle of a suit and I saw a young monk that stirred next to the High altar. It seemed that the young monk was dusting the candelabra and straightening the flower vases.
I thought he was Padre Leone rearranging the altar, and, since it was supper time, I went to him and I told him: “Padre Leone, go to dine, this is not the time to dust and to straighten the altar”.
But a voice, that was not Father Leone’s answered me”: “I am not Padre Leone”, “and who are you? “, I asked him. “I am a brother of yours that made the noviciate here. I was ordered to clean the altar during the year of the noviciate. Unfortunately many times I didn’t reverence Jesus while passing in front of the altar, thus causing the Holy Sacrament that was preserved in the tabernacle to be disrespected. For this serious carelessness, I am still in Purgatory. Now, God, with his endless goodness, sent me here so that you may quicken the time I will enjoy Paradise. Take care of me.”
I believed to be generous to that suffering soul, so I exclaimed: “you will be in Paradise tomorrow morning, when I will celebrate Holy Mass”.
That soul cried: “Cruel!” Then he wept and disappeared.
That complaint produced in me a wound to the heart that I have felt and I will feel my whole life. In fact I would have been able to immediately send that soul to Heaven but I condemned him to remain another night in the flames of Purgatory.”

Email ThisBlogThis!Share to TwitterShare to FacebookShare to Pinterest
Labels: VISION OF PURGATORY

Very interesting account. However, is there such a thing as purgatory? I know St Augustine suggested that those believers in Christ who lived in sin went to purgatory, but there seems to be no mention of it in the bible. Is purgatory purely Catholic teaching? It’s either heaven or hell according to the bible.

Thanks a lot of sharing several testimonies about the truth..This helps me in my faith, please continue to spread this message so that others will believe..

Purification is necessary in this world as the saints are examples of, or in the next. No being could stand before the face of God impure. They would be utterly naked in their acts and state of being, wanting to flee from His just wrath as St John Bosco beholds in his dream. God is pure justice, this does not change, so the debt of every "accepted" soul's sins after death has to be paid in purgatory or by loving acts of sacrifice by a soul on earth.

God is also pure Mercy for those who ask for it, and show they deserve it with acts of love, prayer(contemplation of God) and mortification. We accomplish this through the sacrament of Confession so that the Priest can guide us and make sure we don't do too little or too extreme reparation for sin. This is to attempt to no longer offend the Sacred Heart of Jesus for God did create us in His own image and has more intense feelings of love and being hurt by us than we can ever imagine. He loves us so much that he'll never force our will to love him and do good things, but puts small opportunities to do good works and practice Heavenly Virtues before us daily.

Prayer is considered so extremely powerful because it is not only a sacrifice of our time to God, but by meditating with our body, mind, and soul for even just 30 min. on the pure lives of Jesus and His mother Mary, we should become so pleasing to God that he is often happy to grant us graces in our daily life. And if we should block out selfish thought of our own thoughts and lives while meditating, we're able disconnect from ourselves to understand the workings of the lives of Jesus and his Mother more clearly, therefore coming closer to God. Then we shall be helping ourselves and those souls in Purgatory as St. Padre Pio did. In the end all we possess is our own will. Is it really bad to give it to God if it brings us love and peace?

--I recommend reading The Dark Night of the Soul by St. John of the Cross if you really want to know how to come to God. Its harsh, but the world won't play nice if you do truly want to find God.

Yes , brother, it is very true that the more we come closer to God, the more we are misunderstood, despised and forgotten; even by those whom we call "our own".

there are many daily distractions via the evil one, designed to redirect our soul, thoughts and intentions. be careful of television and media and internet. pray to Mary to intercede for us. ACTS. Adore God, confess our sins, thank God for all His mercy and forgiveness, and supplication or prayer. PEGLAGS pride, envy, gluttony, lust, anger, greed, & sloth. Define them, and avoid them.

Is Purgatory a place? I seem to see this, and hear it many times, because people do not see it in the Bible. They forget that books were left out of the Bible that we use, and still more left out of the Protestant Bible. There are so many Saints who have been shown Purgatory in visions, it seems to me that were it not real, why show it to so many?

Some Fundamentalists also charge, “The word purgatory is nowhere found in Scripture.” This is true, and yet it does not disprove the existence of purgatory or the fact that belief in it has always been part of Church teaching. The words Trinity and Incarnation aren’t in Scripture either, yet those doctrines are clearly taught in it. Likewise, Scripture teaches that purgatory exists, even if it doesn’t use that word and even if 1 Peter 3:19 refers to a place other than purgatory.

Purgatory Not in Scripture”

Some Fundamentalists also charge, “The word purgatory is nowhere found in Scripture.” This is true, and yet it does not disprove the existence of purgatory or the fact that belief in it has always been part of Church teaching. The words Trinity and Incarnation aren’t in Scripture either, yet those doctrines are clearly taught in it. Likewise, Scripture teaches that purgatory exists, even if it doesn’t use that word and even if 1 Peter 3:19 refers to a place other than purgatory.

Christ refers to the sinner who “will not be forgiven, either in this age or in the age to come” (Matt. 12:32), suggesting that one can be freed after death of the consequences of one’s sins. Similarly, Paul tells us that, when we are judged, each man’s work will be tried. And what happens if a righteous man’s work fails the test? “He will suffer loss, though he himself will be saved, but only as through fire” (1 Cor 3:15). Now this loss, this penalty, can’t refer to consignment to hell, since no one is saved there; and heaven can’t be meant, since there is no suffering (“fire”) there. The Catholic doctrine of purgatory alone explains this passage.

Then, of course, there is the Bible’s approval of prayers for the dead: “In doing this he acted in a very excellent and noble way, inasmuch as he had the resurrection of the dead in view; for if he were not expecting the dead to rise again, it would have been useless and foolish to pray for them in death. But if he did this with a view to the splendid reward that awaits those who had gone to rest in godliness, it was a holy and pious thought. Thus he made atonement for the dead that they might be freed from this sin” (2 Macc. 12:43–45). Prayers are not needed by those in heaven, and no one can help those in hell. This verse so clearly illustrates the existence of purgatory that, at the time of the Reformation, Protestants had to cut the books of the Maccabees out of their Bibles in order to avoid accepting the doctrine.

Prayers for the dead and the consequent doctrine of purgatory have been part of the true religion since before the time of Christ. Not only can we show it was practiced by the Jews of the time of the Maccabees, but it has even been retained by Orthodox Jews today, who recite a prayer known as the Mourner’s Kaddish for eleven months after the death of a loved one so that the loved one may be purified. It was not the Catholic Church that added the doctrine of purgatory. Rather, the Protestant churches rejected a doctrine that had always been believed by Jews and Christians.