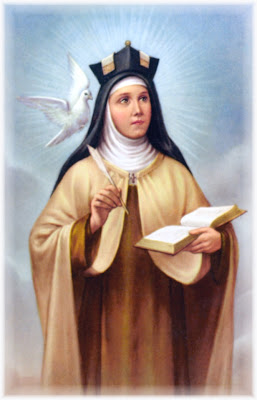 St. Teresa of Jesus, also known as St. Teresa of Avila, lived in Spain during the 16th Century. Her life as a Carmelite, though far removed from the mainstream of modern culture, still speaks powerfully to us today, as we enter the third millennium.

Email ThisBlogThis!Share to TwitterShare to FacebookShare to Pinterest
Labels: Saints, VISION OF HELL

Top website, I had not noticed christtotheworld.blogspot.com earlier in my searches!
Keep up the superb work!

I have a question for the webmaster/admin here at christtotheworld.blogspot.com.

Can I use some of the information from your post right above if I give a link back to your website?

I have a question for the webmaster/admin here at christtotheworld.blogspot.com.

May I use part of the information from your blog post right above if I give a backlink back to this website?

I have had an experience of Hell as well. It was during my conversion when God, after blessing me with an unbelieveably beneficial turn around of my wretched life, proceeded to introduce me to the voice of the demon who had been tormenting me with temptations all my life. A voice of thermonuclear heat and simultaneously liquid nitrogen cold, furiously murderous and of reptilian hissing, which said, "I WILL KILL YOU ALL!" Today I must say my family has lost virtually all Faith, so I can see how it still is working on us. Turn off the TV, the internet, the Xbox and everything else which takes you away from prayer with the heart, and fasting. God bless you all!!

Great Work. Last week only, I came to know about this website

To the administrator, Can i use these prayers tp other social networking sites with the ref of this blog

Hatts Off you for the Great work.. Keep posting

Thanks for sharing... All information are amazing and no doubt that in strongly builds up the catholic faith!!!
Praise JESUS ! Ave Maria!

Thankyou for this website. The devil threw everything he had at me yesterday and the prayers here helped me resist. I receive the eucharist daily and pray the rosary nonstop. God bless all of you and pray that you will leave this life with no regrets having done everything you can. What we do in this life matters. Every second is an opportunity to get closer to God.

Those in most need of Gods Mercy:
Yahweh our God and Mother of Perpetual Help. We commit this world and everything into your hands forever. With all souls, sinners, our families, bloodline, hopes, works, relationships and future. Have mercy on us always through the blood, wounds, face , heart & works of Jesus our Lord. Bless our ways, Grant us protection ,safety and final perseverance always. Unite all our works and prayers with those of the Confraternity of Capuchin, Rosary Confraternity of Dominican& Fatima always. In Jesus Name. Amen.

I have read various accounts of those who have seen hell-Fatima,Faustina,Bosco,etc. I find all of the descriptions to be different. Why is that?

I like your site but did not understand why you have info on mediugorje.I thought it was not approved by our church. Thank you Matt

I enjoy your writing style truly loving this website.

I cannot say the internet is bad, since it brings me to sites such as this. The TV used to offer Bishop Sheen, but is now totally horrid, with "televangelists", having their private jets at the expense of souls searching for truth.
The description of Satan's Hell, as told by St. Theresa of Avila is terrifying. How anyone ignores her warnings is amazing. How is it that so many perish? If they only knew what awaits them, if they continue. We must continually warn them, and this site has the capacity to do just that.