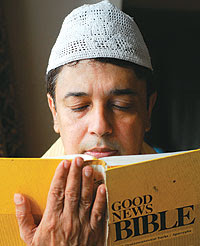 I was born in a rich Muslim family of Pune. My parents belonged to families with a rich religious heritage. When I was barely four, my parents separated. My mother and I moved in with my aunt in Hyderabad. From an early age I was taught Islamic traditions and I also learnt to read the Quran in Arabic. However, I went to schools run by the Jesuits and did well both in studies and sports. My mother and I shifted to Mumbai when I was in the sixth standard.

"It was during this period that I began carefully studying the Quran. However, I found I could not digest the teachings. Yet I did not stop believing in God's existence. This was in the late 1980s. My teenage years and early adult life were difficult—failed relationships, financial hardships and my father's death made me morose. At one point I even decided to end my life by consuming mercury. Luckily, I survived.

"It was all very strange. On the one hand I was attempting suicide, but at another level, I had an out-of-body experience. I felt my spirit drift to my old school—to the feet of Jesus Christ. I could feel his presence. After a year, I visited the school and saw the following words engraved on the pedestal on which a statue of Jesus stands to this day: 'I am the resurrection and the Life.' I believe the Holy Spirit had led me to Christ. Today, I am serving the Lord through the gifts that he has endowed me with.

"Naturally, some Muslim friends did not approve of my giving up Islam. The clerics questioned my change of faith. However, this only strengthened my resolve to study the Bible, the Quran, and the Hadiths. Finally, I realised that Christianity was my true calling."

Email ThisBlogThis!Share to TwitterShare to FacebookShare to Pinterest
Labels: Convert from Islam to Catholic, Near Death Experience

Almighty God the Father also enveloped me in the Holy Spirt. It came from outside me, and I did not deserve it. I suddenly knew the Truth, much like the emphatic awakening that visited St Augustine of Hippo. Now I happily endure the sufferings of this life for my Lord, Jesus. Peace, Brother Syed Hadeed.

About 2 months after my conversion, I too had a personal encounter with Jesus Christ in 2006. This was after being ill for more than 2 years (my coming to Christ was a last resort).

I was visited by an angel in a vision who spoke to me and touched me. As she touched me she said, "I have come to you in the name of Jesus Christ" and I was immediately translated into the presence of Jesus Christ. No words were spoken to me, but I knew a whole lot of things about Him, and His nature, as if I was spoken to in a language without words.

Adequate words do not exist to fully describe this experience. My world view and life was changed in an instant. It was also the beginning of my healing.

Me - undeserving and a sinner completely healed by God's Grace.

Dear Mr. Paul,
Praise the Lord Jesus Christ and thank you for posting this beautiful testimony although quite short..i suggest it is very good if your whole story of conversion can be shared as well.. God bless.