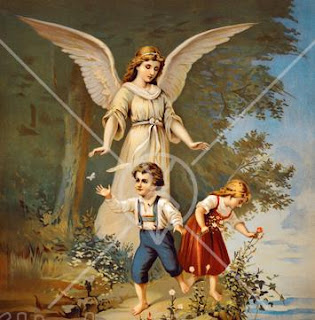 There are some people who doubt the existence of angels. What does the holy Scriptures say about angels? Is it true, as some say, that the stories about them are fictitious ? Several people have asked this question. During this month of October, dedicated to angels, such questions are quite relevant.
In the Holy Bible there are more than three hundred references to angels. Titles like sons of God, saints, armies and messengers are used in the Bible to refer to angels. The word angel comes from the Greek "angelos" which means messenger. This name denotes only their mission. These superhuman beings are often described in an anthropomorphic manner in the Bible.

Angels in the Old Testament


In the life of the chief personalities of Israel and in the most important events of their life, the presence and the help of angels are very evident. Here they often stand in the place of God himself. These messenger appear to men in a visible manner.
It is the angel of the Lord who finds Hagar and comes to her aid (Gen 16:7-16). 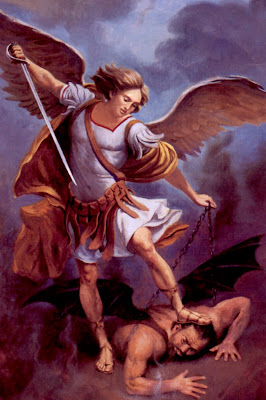 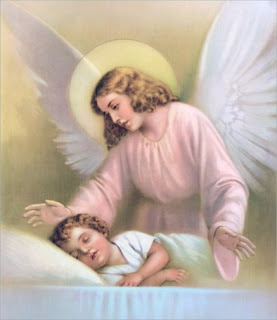 
Angels in the New Testament


The perspective on the angels in the Old Testament is continued in the New Testament.
The role of the angels in the life of Christ is highly important. At the time of Christ's temptation, the heavenly messengers maintained a deep relationship with Jesus (Mt 4:11).
It is clear from Mt 22:30 that they are heavenly beings and are above physical exigencies. They will help the Lord to conduct the last judgement (Mt 13:39,49;24:31). When sinners repent, they too partake of the joy of the Lord (Lk 15:10). At the Second Coming of the Lord, the angels will accompany him (Mt 25:31).
Those who are condemned for eternal punishment will be expelled by them from the kingdom of heaven (Mt 13:41 ff) and the chosen ones will be led by them to the happiness of heaven (Mt 24:31).
The scene where the angels of God descend on the Son of man and ascend into heaven (Jn 1:15) is based on Gen 28:10. This scene highlights the divinity of Christ.
During the passion of Christ, the angels stand ready to come to his aid (Mt 26:53; Lk 22:43).
The angels are below Jesus, the Son of God. They are obliged to adore him (Heb 1:6 ff; Ps 97:7). They are created in him, through him and for him (Col. 1:16).
The angels accept his dominion and worship him (Rev 5:11 ff; 7:11 ff). On the last day they have to accompany him (2 Thes 1:7; Rev 14:14-16).
References to the Archangels are seen only in 1 Thes 4:16 and Jude 9. Indications regarding the fall of the angels are given in 2 Pet 2:4, and Jude 6. That the angels are present at the common worship and adoration is clear from 1 Cor. 11:10.


Angels are appointed to give divine revelations to the children of men.
It is the angel Gabriel who gives the message of the annunciation to Zechariah and Mary(Lk 1:19,26).
The Good News of Jesus' birth is given by the angels of heaven (Lk 2:9-14).
They are also the messengers of the great mystery of Jesus' resurrection (Mt 28:5 ff).
It is they who make the apostles understand the meaning of the ascension of Jesus (Acts 1:10 ff).
Heb 1:14 clearly states that the angels are heavenly messengers who help Lord Jesus in his salvific mission.
The angels also have the duty to protect individuals from spiritual and physical dangers (Mt 18:10; Acts 10:4; 12:15;27:23).
In the Psalms this idea is very prevalent (for example, Ps. 34:7;35:5-6;91:1,11-12 etc.). Angels take the prayers of the saints to God's presence (Acts 5:8;8:3). It is they who lead the souls of the dead to paradise (Lk 16:22).
"May the angels lead you to paradise", is a prayer the Church says for the dead. In the fierce battle of the Church with Satan, the angels, along with their leader Michael, help and protect her (Rev 12:1-9).
The activities of the angels tell us that heaven and earth are indivisibly connected. The liturgical prayers of the Church are in consonance with the eternal adoration and worship of the angels in heaven (for example, Glory to God in the highest, Sanctus etc.). The heavenly dwelling of the angels is around us-this truth is revealed to us in the book of Revelation.
The holy Scriptures offer to us the call to live in God's presence, before his messengers in holiness and reverence (for example, Dan 10:9; Tob 12:16).
The teaching of the Bible is to honour and revere the angels. It is also clear that adoring them as beings equal to God is prohibited (Rev 22:8; Col. 2:18 ff).
Excessive devotion to them is also not to be fostered. Devotion to one's guardian angel has been prevalent in the Church from the time of St Bernard.


Conclusion
The lines a renowned artist wrote to Oscar Wilde are remarkable: "As science becomes more and more materialistic, the more numerous will be the angels that I draw. Their wings will remain as my witnesses of the eternal soul."

Modern man who has become a slave to materialism and evil, needs to rediscover the teaching of the Bible regarding angels. The profound teaching in the Bible holds that angels guide, console and protect the people of God in suffering and persecution. Angels are not figments of the imagination.

Through them God is ever ready to guard his people. He expresses his glory and power through them. As the presence of those spiritual beings is around us (Eph 6:12), we are not alone in marching forward in the spiritual battle. The truth is that there will be no one who has not experienced the touch of God's invisible angels in his soul and body at some time or another.

Email ThisBlogThis!Share to TwitterShare to FacebookShare to Pinterest
Labels: Angels