Greater Love Has No One Than This, That He Lay Down His Life For His Friends (John 15:13)

Had I been there --
Would I have dared --
Dare die in his stead,
As Thomas did, bowing his head
On a night without a star,
In the cruel fields of ...?
from "Had I Been There,"
a poem in honor of A.T. Thomas,

by Pradip Sen
Thomas Anchanikal, known as A.T. Thomas, was back home in Hazaribag, in . He was back among the dalits, the poor and illiterate, the oppressed. They knew him as their teacher, their advocate. He made their cause his own.

As a young Jesuit in the 1970s, A. T. had heard the cry of the poor and his personal call to live and work among them. He was a practical man who could fix a TV antenna or a car's engine. He was a compassionate man who drove the sick to the hospital and sat by the dying. And he was a visionary man who heard the people's stories of oppression and recognized the power latent in their talents and determination.
A.T. and his fellow Jesuits recognized the great need of the dalits for education. Even children had to work all day to help support their families, so normal schooling was beyond them. A.T. and the others gradually developed a network of night schools around Hazaribag. Gathering for school, people began to share their other concerns, and the whole range of social issues and needs came to the fore. A.T. became involved in every aspect of the people's lives.
After two decades of nonstop labor, in 1996 A.T. went to to work on a master's degree in sociology so he could return and serve the people better. In October 1997 he was back in doing research for his degree, back among the lowest of 's social classes, the people without a caste, the very poor people of God whom he loved. Some years earlier A.T. had been involved in a legal dispute. Dalits in a village near Hazaribag had lost a parcel of land that they cultivated to a group from a higher caste. They went to court and, to everyone's surprise, won their case. The offending parties went to jail but never forgot who had caused them to lose face and their freedom.
On , A.T. went to the , where he found some people dressed in police uniforms beating one of the villagers. As he started to investigate the violence, one of the would-be police recognized him and said, "This is the man who sent me to jail." The men dressed as police were in fact local insurgents who extorted money from the villagers. They surrounded A.T. and led him away at gunpoint. The villagers protested, "He is a good man; let him go." But A.T. disappeared into the night.
"There was never any doubt as to where A.T.'s sympathies lay," writes his fellow Jesuit Kevin Cronin. "As he had perceived Jesus to have been, A.T. felt himself called to be on the side of the poor, the victims of injustice in whatever form." A.T. became the latest victim of violent injustice. For two days, as authorities waited for the expected ransom demand, rumors began to circulate that A.T. had been beaten and killed. On October 27, his battered and decapitated body was found in a river bed. That evening, the body was brought to St. Xavier's in Hazaribag and placed into a coffin. The next day friends and relatives, religious sisters to whom he had ministered, and crowds of his beloved untouchables gathered for the Church's liturgy to honor A.T.'s memory and draw strength from his sacrifice.
"This father just cannot abide injustice anywhere," people had said of him. "If he sees injustice anywhere, he will fight." Injustice led A.T. to his violent death. But in facing this injustice, A.T. Thomas had already found life.

In 1996 Richie Fernando SJ was killed aged 26 years by a hand grenade released by a student in the Jesuit Refugee Service technical school for the handicapped near Phnom Penh.
On Richie wrote in his diary:

"I wish, when I die, people remember not how great, powerful, or talented I was, but that I served and spoke for the truth, I gave witness to what is right, I was sincere in all my works and actions, in other words, I loved and I followed Christ." 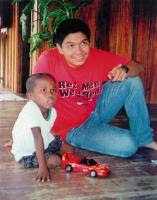 Richie Fernando was a long way from home. He was a Filipino Jesuit in Buddhist Cambodia. He was educated and full of promise in a camp where refugees maimed by bullets and land mines and scarred by hunger and disease fought for hope. He loved life in a land where life was hard and death nearby.
Richie went to in May 1995 as part of his Jesuit training. He had entered the Society in 1990 and finished the novitiate and collegiate studies. Before going on to theology studies and ordination, he was sent to work at Banteay Prieb, a Jesuit technical school for the handicapped not far from . Banteay Prieb describes itself as a "place that enables the disabled to tell their own stories, to gather strength and hope from being with one another, and to learn a new skill that enhances a sense of dignity and worth." Here people disabled by landmines, polio, and accidents learn skills that allow them to earn a living. Banteay Prieb means "the Center of the Dove."
When Richie arrived, his devotion to the students quickly won their trust. He began learning their Khmer language and came to appreciate their religious traditions. And he loved to share their stories, stories of survival during Pol Pot's genocidal regime, stories of the devastation of their society through poverty, displacement, and the nine million landmines that still plague their land.
One of these survivors is Sarom. Already an orphan, at 16 Sarom became a soldier; two years later he was maimed by a landmine. Sarom finished his courses at Banteay Prieb and wanted to stay on there, but school authorities found him disruptive and asked him to leave. Richie Fernando mentioned Sarom in a letter to his friends in the , saying that although Sarom was "tricky" he still had a place in Richie's heart.
On , Sarom came to the school for a meeting. Angered, he suddenly reached into a bag he was carrying, pulled out a grenade, and began to move towards a classroom full of students; the windows of the room were barred, leaving the students no escape. Richie Fernando came up behind Sarom and grabbed him. "Let me go, teacher; I do not want to kill you," Sarom pleaded. But he dropped his grenade, and it fell behind him and Richie. In a flash Richie Fernando was dead, falling over with Sarom still grasped in his arms, protecting him from the violence he had made.
Only four days before his death Richie had written a long letter to his Jesuit friend . "I know where my heart is," he wrote; "It is with Jesus Christ, who gave his all for the poor, the sick, the orphan ...I am confident that God never forgets his people: our disabled brothers and sisters. And I am glad that God has been using me to make sure that our brothers and sisters know this fact. I am convinced that this is my vocation."

Three days after Richie's death, his shocked family and friends in the celebrated his funeral. At the same time, his shocked Cambodian friends carried an urn containing cloths soaked in his blood to a Buddhist funeral mound. In their shock they mourned; and in their mourning they gave thanks for Richie, the man they knew and loved, their son, their brother, their teacher, their friend.
Shocked by what he had caused, Sarom sat in his jail cell and mourned too.
In March 1997, Mr. and Mrs. Fernando wrote to 's King Sihanouk, asking for pardon for Sarom; somehow, someone had to stop the violence. Sarom had not wanted to kill Richie. "Richie ate rice with me," he said; "he was my friend."