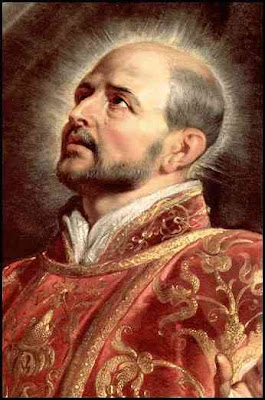 The Spiritual Exercises
of
St. Ignatius of Loyola
FIRST METHODThe first Method of Prayer is on
This method of prayer is meant more to give form, method and exercises, how the soul may prepare itself and benefit in them, and that the prayer may be acceptable, rather than to give any form or way of praying.I. The Ten CommandmentsFirst let the equivalent of the second Addition of the Second Week be made; that is, before entering on the prayer, let the spirit rest a little, the person being seated or walking about, as may seem best to him, considering where he is going and to what. And this same addition will be made at the beginning of all Methods of Prayer. Prayer. A Preparatory Prayer, as, for example, to ask grace of God our Lord that I may be able to know in what I have failed as to the Ten Commandments; and likewise to beg grace and help to amend in future, asking for perfect understanding of them, to keep them better and for the greater glory and praise of His Divine Majesty.For the first Method of Prayer, it is well to consider and think on the First Commandment, how I have kept it and in what I have failed, keeping to the rule of spending the space of time one says the Our Father and the Hail Mary three times; and if in this time I find faults of mine, to ask pardon and forgiveness for them, and say an Our Father. Let this same method be followed on each one of the Ten Commandments.First Note. It is to be noted that when one comes to think on a Commandment on which he finds he has no habit of sinning, it is not necessary for him to delay so much time, but according as one finds in himself that he stumbles more or less on that Commandment so he ought to keep himself more or less on the consideration and examination of it. And the same is to be observed on the Deadly Sins.Second Note. After having finished the discussion already mentioned on all the Commandments, accusing myself on them and asking grace and help to amend hereafter, I am to finish with a Colloquy to God our Lord, according to the subject matter.II. On Deadly SinsAbout the Seven Deadly Sins, after the Addition, let the Preparatory Prayer be made in the way already mentioned, only with the difference that the matter here is of sins that have to be avoided, and before of Commandments that have to be kept: and likewise let the order and rule already mentioned be kept, and the Colloquy.In order to know better the faults committed in the Deadly Sins, let their contraries be looked at: and so, to avoid them better, let the person purpose and with holy exercises see to acquiring and keeping the seven virtues contrary to them. III. On the Powers of the Soul Way. On the three powers of the soul let the same order and rule be kept as on the Commandments, making its Addition, Preparatory Prayer and Colloquy. IV. On the Bodily Senses Way. About the five bodily senses the same order always will be kept, but changing their matter.Note.
Whoever wants to imitate Christ our Lord in the use of his senses, let him in the Preparatory Prayer recommend himself to His Divine Majesty, and after considering on each sense, say a Hail Mary or an Our Father.
And whoever wants to imitate Our Lady in the use of the senses, let him in the Preparatory Prayer recommend himself to her, that she may get him grace from Her Son and Lord for it; and after considering on each sense, say a Hail Mary.SECOND METHOD OF PRAYER 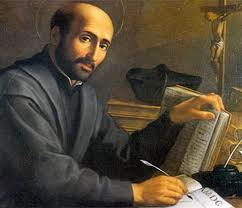 It is by contemplating the meaning of each word of the Prayer.Addition. The same Addition which was in the First Method of Prayer will be in this second.Prayer. The Preparatory Prayer will be made according to the person to whom the prayer is addressed.Second Method of Prayer. The Second Method of Prayer is that the person, kneeling or seated, according to the greater disposition in which he finds himself and as more devotion accompanies him, keeping the eyes closed or fixed on one place, without going wandering with them, says Father, and is on the consideration of this word as long as he finds meanings, comparisons, relish and consolation in considerations pertaining to such word. And let him do in the same way on each word of the Our Father, or of any other prayer which he wants to say in this way.First Rule. The first Rule is that he will be an hour on the whole Our Father in the manner already mentioned. Which finished, he will say a Hail Mary, Creed, Soul of Christ, and Hail, Holy Queen, vocally or mentally, according to the usual way.Second Rule. The Second Rule is that, should the person who is contemplating the Our Father find in one word, or in two, matter so good to think over, and relish and consolation, let him not care to pass on, although the hour ends on what he finds. The hour finished, he will say the rest of the Our Father in the usual way.Third Rule. The third is that if on one word or two of the Our Father one has lingered for a whole hour, when he will want to come back another day to the prayer, let him say theTHIRD METHOD OF PRAYER 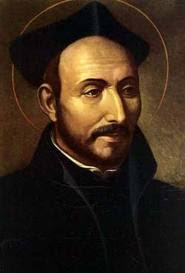 It will be by rhythm.Addition. The Addition will be the same as in the First and Second Methods of Prayer.Prayer. The Preparatory Prayer will be as in the Second Method of Prayer.Third Method of Prayer. The Third Method of Prayer is that with each breath in or out, one has to pray mentally, saying one word of the Our Father, or of another prayer which is being recited: so that only one word be said between one breath and another, and while the time from one breath to another lasts, let attention be given chiefly to the meaning of such word, or to the person to whom he recites it, or to his own baseness, or to the difference from such great height to his own so great lowness. And in the same form and rule he will proceed on the other words of the Our Father; and the other prayers, that is to say, the Hail Mary, the Soul of Christ, the Creed, and the Hail, Holy Queen, he will make as he is accustomed.First Rule. The First Rule is, on the other day, or at another hour, that he wants to pray, let him say the Hail Mary in rhythm, and the other prayers as he is accustomed; and so on, going through the others.Second Rule. The second is that whoever wants to dwell more on the prayer by rhythm, can say all the above-mentioned prayers or part of them, keeping the same order of the breath by rhythm, as has been explained.

Email ThisBlogThis!Share to TwitterShare to FacebookShare to Pinterest
Labels: Spiritual Exercises of St Ignatius of Loyola