Enkindling the Gift of the Holy Spirit received by the Laying on of hands - 2Timothy 1:6 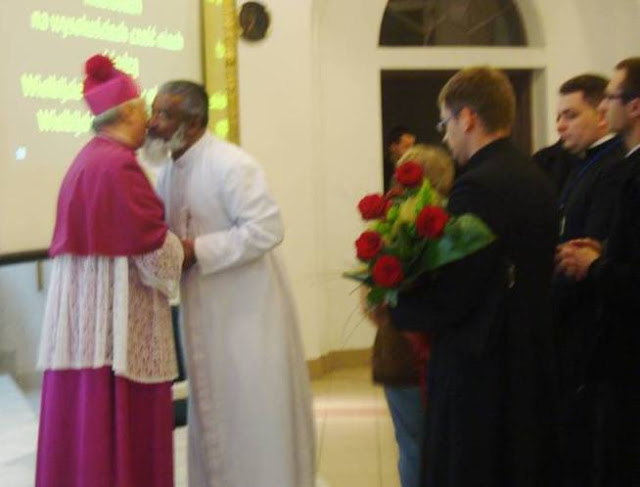 Arch Bishop Most Rt. Rev Edward  Ozorowski and Fr James
Fr. James preached a retreat for priests in Poland at Bialystok in the Shrine of the Divine Mercy from 16th May to 20th.
Some 134 priests attended the retreat with great enthusiasm. Most of the priests were from the Arch Diocese of Bialystok. There were some religious priests also. Fr. Jiji Manjackal, nephew of Fr. James,a missionary of St. Francis de Sales working in Philippines also was there to attend the retreat. All the priests attended the retreat from the beginning to the end. 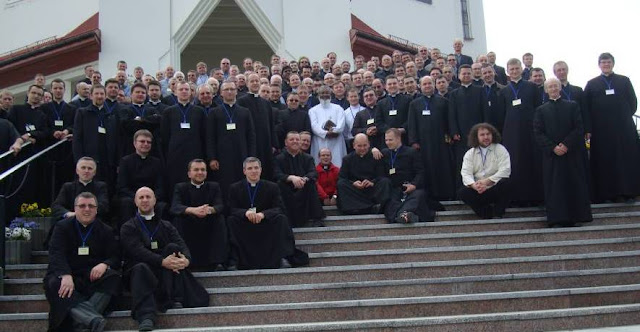 The subject of the retreat was "enkindling the Gift of the Holy Spirit received by the Laying on of hands" ( 2Tim 1:6). All the talks were on priesthood.
On the second day in spite of his heavy schedule of visiting parishes, the Arch Bishop Most Rt. Rev Edward  Ozorowski came to the hall to greet the participants and to give a short message. There was inner healing prayers and prayer of renewal of priesthood by the laying on hands.
On the last day some 18 priests gave testimonies of healing, conversion and change of lives.The retreat was organized by Ewa Gierejko and her community under the able guidance of Fr.Zbigniew Snarski, the spiritual director of the seminary.
The priest's retreat officially ended with the concelebrated mass of all these priests on 20th at 3PM in the big Shrine of the Divine Mercy where the relics of St.Faustina and of her spiritual director Bl.ks.Michala are venerably preserved. 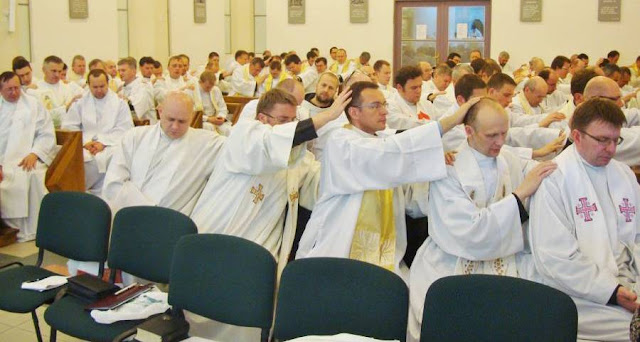 More than 2000 people attended the Mass. The Sanctuary was packed with people. Fr. James preached and prayed for healing after the Mass. After the prayers of healing, all the priests went down to the people to lay hands on the people and to bless them individually. 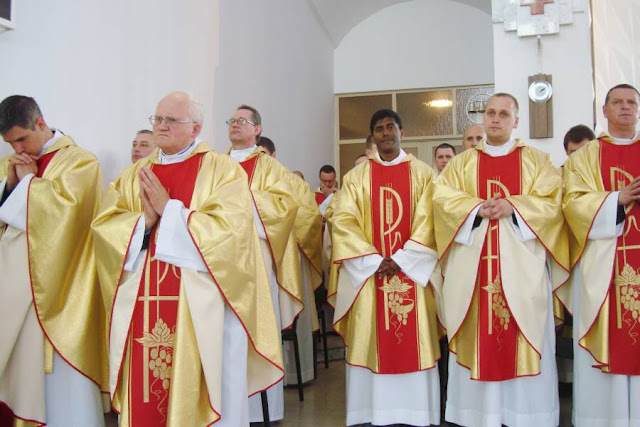 It was a great experience  of the outpouring of the Holy Spirit for the people gathered.
Testimonies of priests
Some Testimonies of priests who attended retreat with Fr James
1. "When I attended the retreat of Fr.James at Torus last year, I was liberated from my habit of smoking for 25 years.In this retreat I received much inner healing.My priesthood is renewed. "
2. "In the past I had six surgeries.When I came to this retreat I was unable to kneel down.Now I am fully healed, I can kneel down for hours without pain.The Holy Spirit healed my soul and gave me a new heart."
3. "During the prayers my name was called out, I received an inner healing from feelings of fear ,and rejection.I received the gift of forgiveness.I was able to forgive all.Now I am filled with great joy and peace"

4. "In this retreat I prayed for the gift of chastity and clelibacy,and the Lord gave them to me.I am healed of my pains on my knees "

5. "I am healed from all fears and inferiority complex. I am strenghtened in my priesthood.  "

http://www.jmanjackal.net/eng/priestespl.htm
Father James Manjackal
He is a missionary in the Congregation of the Missionaries of St. Francis de Sales. He was born on 18 April 1946 in Cheruvally, in the state of Kerala in South India. He was ordained priest on 23 April 1973. In 1989 he founded “Charis Bhavan” – a Charismatic Renewal Retreat Centre in Kerala. One of his books entitled “33 Charismatic Prayers” has been translated into a  dozen or so languages. From May 16 to 20 the charismatic preacher will conduct a retreat for priests at the Shrine of the Divine Mercy in Bialystok (more info on: www.rekolekcje.bialystok.pl). From July 14-17  Fr. James will preach a retreat for married couples in Bialystok. This year he will also conduct retreats in Ostroleka, Skarzysko-Kamienna, Poznan and Torun.

Where to celebrate Christmas advise?