Converted from Islam receiving threats from extremists that they will kill them and their families.He has received threatening letters from different Islamic Organizations, told Ayub to LEAD. He also added that his meetings were conducted with different Christians organizations and with foreign delegations but not a single one helped us 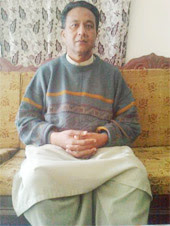 Ayub Masih has come to LEAD office and told his story of conversion from Islam to Christianity. He also said how he had spent his four years in Christian faith. He is living in hidden. He has no job or any kind of work for earning his livelihood. He added ” I and my wife are satisfied that we have Jesus in our lives “.

I have four sisters and one brother ,my father was died in 1996 and my mother is alive. My family belongs to tribe of Jutt (tuddy). I was married in 1998. I have two children one son and daughter. My son is 11 years old and my daughter is 4 years old. My family is learned family and have well knowledge of religion.


How I accepted Christianity:

I was working in Sahiwal as cable net work as a recovery in-charge. Some Muslims Colleagues told me that there was one Muslim who accepted Christian religion and denounced Islam. I was surprised and as well as shocked to know this story of conversion from Islam to Christianity. I told that informer that I wanted to meet him face to face.  My message was conveyed to that person. The person who accepted Christian religion his name was Zubair Shah and after accepting Jesus his name was changed as Emmanuel Shah. Emanuel Shah was reluctant to meet me and in this way four months passed away. After making satisfaction that I was not going to create any problem for him then he was ready to meet me in person and willing to talk with me. I had asked some questions to Shah sahab that why you had changed his religion and how you changed his religion which was the surety of Paradise.

I put many questions regarding his conversion from Islam and tried to reconvert him towards Islam. He never ever tried to influence me towards Christian religion that I would accept Jesus Christ. One day he gave me Holy Bible for reading but I returned him saying that I did not know any thing about Bible. I asked him that If you made me satisfied from Holy Quran then I would accept. One my this question he gave me many references from Holy Bible regarding the personality of Jesus Christ and references about earlier Holy Books. He gave me Bible and told me to read it you would find all answers of your questions. I read the Bible and read Quranic references about Jesus and Mary. I made comparison of different topics such as Day Of Judgement, Salvation and crucifixion of Jesus Christ , while comparing Bible and Quran I found that Jesus Christ had the all Authorities. This was my turning appoint towards Christianity.


How I was baptized:

I was under pressure while I changed my mind to accept Jesus because of Apostasy and fear of killing and other problems from Muslims. At the end I put all my worries on God thinking that God would guide me through dream what is right for me and what is wrong? I had a dream and saw that my father , who died 18 years ago, was sitting on the bench of Church and asked me that why you had not swept and cleaned the Church. I was satisfied that Jesus had given this Good News to my father and this was my encouragement to accept Jesus Christ. I told to Shah sahab about this and he gave me the reference of Pastor Munir Phool and he baptized me.


How My wife came to Jesus:

I often read Bible and my wife often asked many questions about Bible why I read this Book. One day I shared with her about my accepting of Christian Religion. My wife told that did you know that after doing this our relationship as husband and wife would be dissolved. I shared that all my matters and problems I had put on God , He would guide me what I had to do. We both spent that night in silence and on morning she told that what you had done you should have not to show and tell any body. This was between you and your God. In this way we spent one year. We both did not force each other regarding religion. After one year she showed her interest in Christianity and shared with me that she also wanted to accept Jesus Christ. In this way she was also baptized by Pastor Munir Phool. We both willing to get baptized of Children too but Pastor told that Children would be baptized when they would be matured.


How my family came to know about our new life in Jesus:


Threats and hardships which I and my family suffered:

I had received many threats from family members and also boycotted from my family. They also kicked out from my house and also deprived of from my father’s property. In this way many Muslims came to know all this story of my conversion.I received many unknown phone calls and warned to accept again Islam otherwise i would be killed. I also received some threatening letters from different Islamic organizations. One night we were sitting in street because the light was broke down and weather was hot. Two men on motor bike came to our house and one of then said that this was the man who was sitting and the other one who was at the back of bike sitting fired at me, I was luckily saved but they thought that i had hit by fire and they ran away. After this incident we were very scared and fearful which is still going on.

I got into contact with Sohail John by Pastor Munir Phool. I told him all this incident and my problems which I and my family is facing until now. They have arranged many meetings with different foreigners and told them our problems which we were facing due to our Christian faith. He has not helped me and supported me until now.


My request to LEAD:
I request LEAD , please help me and my family and save our lives. I will be very thankful.


- LEAD is a Pak Christian relief, development and advocacy organization