But as for what was sown on good soil, this is the one who hears the word and understands it, who indeed bears fruit and yields, in one case a hundred fold, in another sixty, and in another thirty (Gospel of St Mathew 13:23) 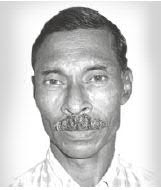 For the last 18 years Kunjumon has been distributing nearly 2000 copies of Vachanolsavam (Asia's Most Widely Distributed Catholic Mission Magazine) each month to the various parishes, colonies, hospitals and jails in Kerala, thus contributing his share to the evangelization work.

He was a Muslim before.

But 14 years ago he came to know about Jesus and became a Catholic on his own accord. He started his Vachanolsavam service distributing 250 copies each month.
How he met Jesus Christ
Once when his life partner was suffering from multiple diseases like chest pain, ulcer and vomiting, he took her to the hospital.

As they were standing in the Queue to see the doctor, his wife who was seriously sick was praying to Jesus.

Wife - Vision of Jesus
Then she had a vision of Jesus wearing a red cloak and she had a great desire to go to Potta (Divine Retreat Centre, Kerala, India). He brought her to Potta to listen to the Word.

They prayed to Jesus earnestly.

She vomitted every time she ate food for many years. But when she ate the food at Potta she did not vomit.

How JESUS cured his wife

1. Jesus gave her complete cure from all her diseases.

2. She was illiterate, but soon, with the enlightenment from the Holy Spirit, she began to read the Bible.

Spread Risen Christ to Muslims and Non-Christians
He also became a Vachanolsavam missionary. He had witnessed how Jesus worked miracles in the lives of many giving them healings and blessings of all sorts.

Through his Vachanolsavam ministry, many of the inmates of hospitals and jails became readers of Vachanolsavam, getting solace and healing from Jesus.

He testifies to the fact that his services for the glorification of God have been bringing him abundant blessings.

The Word that became flesh is Jesus. And the Word became flesh and lived among us, and we have seen his glory, the glory as of a father’s only son, full of grace and truth (Jn 1:14).

Jesus - who is complete God and complete man.

He took the human form and was born of a virgin at the will of the Father (Is 7:14). His name is called the Word of God (Rev 19:13). Do you want to give Jesus to the world? Then, proclamation of the Word of God is most essential. When each one of us shares the Word with our testimony, we are proclaiming the Word of God.

But he said to them, My mother and my brothers are those who hear the word of God and do it (Lk.8:21).

WHEN LISTENING TO THE WORD OF GOD

1. Cleansing of life takes place: Jesus said, You have already been cleansed by the word that I have spoken to you (Jn 15:3).

2. The Powers of Darkness are cast out: He cast out the spirits with a word, and cured all who were sick (Mt 8:16).

3. Miraculous Healings take place: They cried to the Lord in their trouble, and he saved them from their distress; he sent out his word and healed them, and delivered them from destruction (Ps 107:19-20).

4. The great Word-power: God created the first man by the Word and He gave him participation in the creative process. Adam-Eve couple, the first creations of God, has multiplied into a mind-boggling seven billion, filling the earth.

He created the earth, the sun which is colossally more gigantic than the earth, and the infinite number of stars even bigger than the sun, by merely saying ‘Let there be’ and he sustains all these things by his powerful word (Heb 1:3).

5. God accomplishes his works through the Word: