Interview with Bishop George Palliparampil S.D.B of Miao, India by Mark Riedemann
http://www.miaodiocese.org
MIAO, India: When George Palliparampil, today the bishop of Miao, started ministering in the northeast corner of India, his missionary work was illegal and he had to endure police interrogation.
Despite ongoing obstacles, Bishop Palliparampil's missionary home is the place where the Catholic Church has grown the most over the past 30 years, with more than 10,000 adult baptisms every year despite a ban on conversions. Today over 40% of the approximately 900,000 inhabitants of Arunachal Pradesh are Catholics and their number is growing rapidly.
The 56-year-old bishop speaks of his experience: 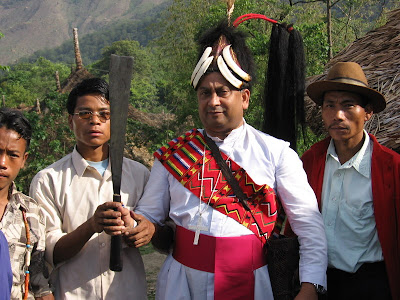 Bishop George with the tribals of Miao

Q: Your Excellency, we are talking about the northeastern corner of India, a very mountainous region with tribes, which up to 60 years ago were headhunters with a pagan culture. How many tribes are living in this area today?
Bishop Palliparampil: There are 26 major tribes, which can be divided into, I don't know, more than 120 sub-tribes and each of these sub-tribes have their own dialects and specific culture.

Q: Now these tribes were pagan?
Bishop Palliparampil: I would clarify the word pagan by saying they were people who did not have any organized religion. They worship the powers of nature. The word "animism" would be a good description for them. It's all about spirits, both good spirits and evil spirits. If anything good happens it is because a good spirit is there. If anything bad happens it is because an evil spirit is there and the evil spirit has to be propitiated. A propitiatory sacrifice has to be made in order to appease this evil spirit.

Q: Is there a concept of a god?
Bishop Palliparampil: Yes, for example the Tani believe in one common ancestor. I have made a study of their culture and it is very similar to what we read in the book of Genesis. They believe in one God. The sun and moon are the two eyes of God through which God sees us. The Abotani -- the first father -- had only two sons like Cain and Abel and so the story continues.
Q: So when Christianity arrived, there was an openness to it?
Bishop Palliparampil: There was and there is. In fact they realized that they are finding fulfillment in something, which they were holding on to partially. For the Tani groups they are finding that they are part of a world religion. The Tangsa find a completion of their stories. Or we have the famous Mishmi cross. There are some groups of Mishmis who tattoo a cross on their body but nobody knows anything about the origin of this tattoo. 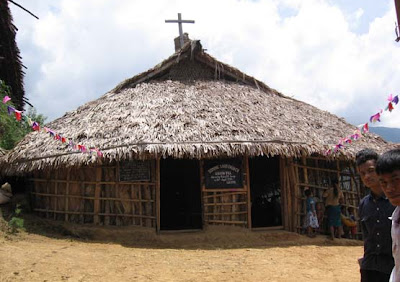 Catholic Church in the land of the tribals

Q: The new acceptance of Christianity in this area was fraught with challenges. There were obstacles imposed not just by the pagan culture but also by restrictions enforced by the Indian government in which, up until very recently, Christians were not allowed to minister in the area of Arunachal Pradesh. When did you first enter Arunachal Pradesh?
Bishop Palliparampil: My first visit was to a village called Pappu nala where about 400 people gathered to celebrate Christmas. As we reached the area we found it surrounded by police and so we left. On the way, along with another priest, we were picked up and detained until 1:30 a.m.. They questioned us but, instead of frightening me at least, it gave me the determination that something must be done here as I found the people so eager for faith, to have Church services -- all that they were not able to have.

Q: Politicians didn't want Christians to enter, they didn't want Christians to evangelize and they would arrest and deport you. But what was the reaction of the people?
Bishop Palliparampil: They want somebody who loves them -- this is my experience. I found 100% acceptance and to make this story more believable, the moment the people in Pappu nala village heard that we were detained, 300 of them came to the police station with daggers, swords and torches and surrounded the whole station. They would not move until we were released. At around 11:30 p.m., the police officer asked us: "Please tell these people to go away. You will stay the night here and we will bring you to your place tomorrow." I insisted: "No, we did not call them" and the village chief said: "We will not leave this place." Finally at around 12:30 in the night, they got a truck from the army to take us back to Assam but the people still said: "We will not leave because we do not trust the government." As many of them as possible got into the truck and escorted us all the way back to the mission and only then they went back. This is the reaction of the people. I've been there all these years, at first transiting in and out and later, from 1992 on, staying there and I would say, I'm one of them.

Q: In fact now the government increasingly perceives the Church as that which protects the local culture. How is it that you are trying to protect the local culture and how are you succeeding in the face of globalization and secularization?
Bishop Palliparampil: Exactly. This is the first thing we have to keep in mind: the wrong understanding that some people have about culture. Some people think that culture means something very static -- an old style of dressing and living maybe in traditional huts. That alone is not culture. Culture is what makes a man; it is that which gives him his identity, his thinking pattern, his value system. By becoming a Christian or by living a Christian life in the modern globalized society, a tribal doesn't become less tribal. 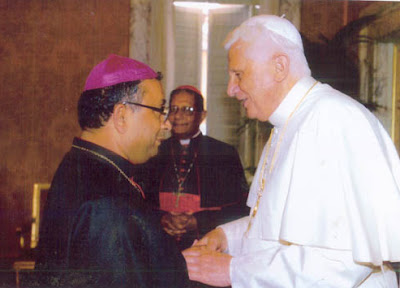 Q: In your diocese alone there are 70,000 Catholics and this number is growing rapidly. What would you say has been the greatest tool of evangelization, which has encouraged the growth of faith in Arunachal Pradesh?
Bishop Palliparampil: I think the greatest success, if I could call it that, was that the people felt that in the Church they find somebody who walks along with them. It is not somebody coming and giving them some plans or some projects and saying: "Do this and you will grow" or, "we are making funds available for you and you can do whatever you want to do with it" or "You pray like this and you will be saved … no." What they have seen is somebody who is involved in every aspect of their lives and they accept it.
I can quote the police officer that detained us in 1980. He said very clearly: "There are no villages where these Christian missionaries have not reached. They have slept in the tribal houses. They are eating with the tribals. And these tribals can walk into their houses anytime. Their [tribal] children go to their schools all over India and people who are sick, they have them taken for treatment -- not just in the northeastern hospitals but as far as Chennai, Apollo and Velur, and not for conversion but so that people will get well and purely on humanitarian grounds. When these people [Christian missionaries] reach out, I just have to accept, the tribals just want to be part of Christianity." And this is what really is happening. It's not an imposed kind of conversion as some people try to imply. It is just acceptance......

A good news story.thank you

I thought most of the Christians in the North East were Protestants? It’s good to learn the Catholic Church is active there too. The Indian Church finally seems to be realising its sense of mission and I hope that continues despite the difficulties.

Dear I want to come for a retreat with my wife.kindly advice me.
Thank you