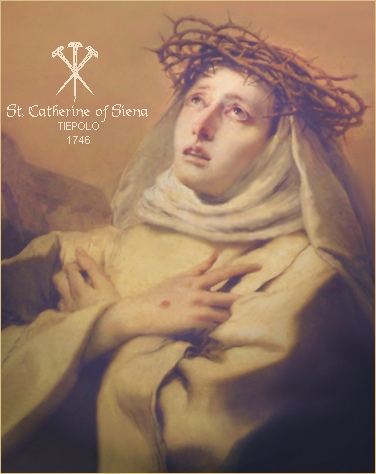 Dictated by her, while is a state of ecstasy, to her secretaries, and completed in the year of Our Lord 1370.


A TREATISE OF DISCRETION    22. Of the four principal torments of the damned, from which follow all the others; and particularly of the foulness of the Devil.    "My daughter, the tongue is not sufficient to narrate the pain of these poor souls. As there are three principal vices, namely: self-love, whence proceeds the second, that is love of reputation, whence proceeds the third, that is pride, with injustice and cruelty, and with other filthiness and iniquitous sins, that follow upon these."So I say to you, that in Hell, the souls have four principal torments, out of which proceed all the other torments. The first is, that they see themselves deprived of the vision of Me, which is such pain to them, that, were it possible, they would rather choose the fire, and the tortures and torments, and to see Me, than to be without the torments and not to see Me."This first pain revives in them, then, the second, the worm of Conscience, which gnaws unceasingly, seeing that the soul is deprived of Me, and of the conversation of the angels, through her sin, made worthy of the conversation and sight of the devils, which vision of the Devil is the third pain and redoubles to them their every toil. 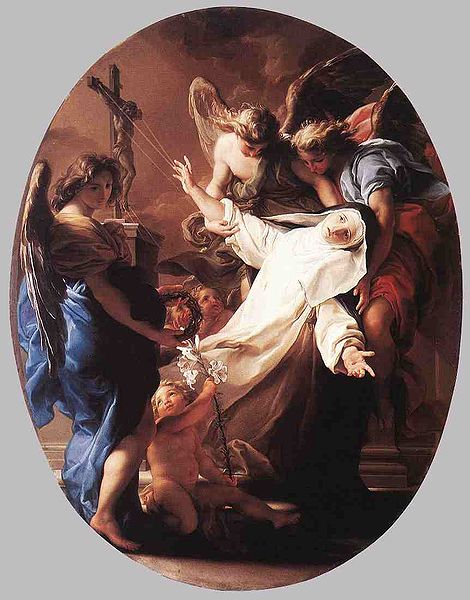 "As the saints exult in the sight of Me, refreshing themselves with joyousness in the fruit of their toils borne for Me with such abundance of love, and displeasure of themselves, so does the sight of the Devil revive these wretched ones to torments, because in seeing him they know themselves more, that is to say, they know that, by their own sin, they have made themselves worthy of him. And so the worm of Conscience gnaws more and more, and the fire of this Conscience never ceases to burn. And the sight is more painful to them, because they see him in his own form, which is so horrible that the heart of man could not imagine it."And if you remember well, you know that I showed him to you in his own form for a little space of time, hardly a moment, and you chose (after you had returned to yourself) rather to walk on a road of fire, even until the Day of Judgment, than to see him again. With all this that you have seen, even you do not know well how horrible he is, because, by Divine justice, he appears more horrible to the soul that is deprived of Me, and more or less according to the gravity of her sin. 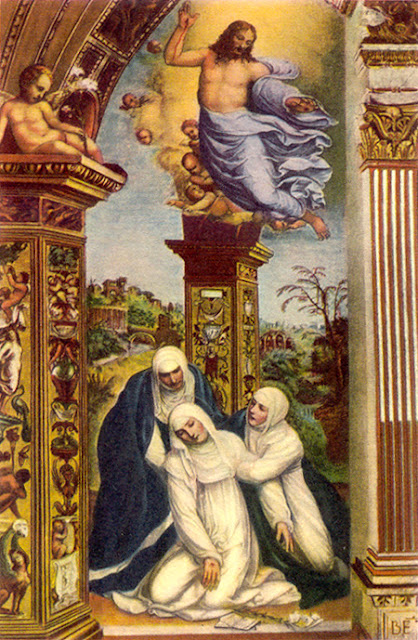 St Catherine of Siena while receiving Stigamata
"The fourth torment that they have is the fire. This fire burns and does not consume, for the being of the soul cannot be consumed, because it is not a material thing that fire can consume. But I, by Divine justice, have permitted the fire to burn them with torments, so that it torments them, without consuming them, with the greatest pains in diverse ways according to the diversity of their sins, to some more, and to some less, according to the gravity of their fault."Out of these four torments issue all others, such as cold and heat and gnashing of the teeth and many others. Now because they did not amend themselves after the first reproof that they had of injustice and false judgment, neither in the second, which was that, in death, they would not hope in Me, nor grieve for the offense done to Me, but only for their own pain, have they thus so miserably received Eternal Punishment."

Email ThisBlogThis!Share to TwitterShare to FacebookShare to Pinterest
Labels: St Catherine of Siena on Hell

Unfortunately, we hear nothing of Hell from the pulpits of our churches anymore. Not even one sermon per year. It is all pablum, i.e., that all will eventually be saved due to the fathomless mercy of God. The plain fact is, however, that as long as we are able to take a breath the mercy of God is available and it is of such magnitude that it can forgive any sin as long as there is true sorrow and a firm purpose of amendment. Upon death, however, the fountain of mercy is turned off while the fountain of justice is turned on. Thus, the reality of both Heaven and Hell.

You are precisely right, William.

Very true William. From the pulpit we rarely hear hell. Constant reminders of hell is required to guide people and take Godly ways.

REaly sounds so horrible the facts about hell, really confused n think i might need counselling about the filthiness sin, really having problems with that especially on my thoughts. not willingly though , just coming up on my mind even when i keep resisting it!!, quite frustrating n loosing hope n all that , any help would be so much appreciated.

Everything is very open with a really clear clarification of the issues.
It was definitely informative. Your site is extremely helpful.
Thank you for sharing!